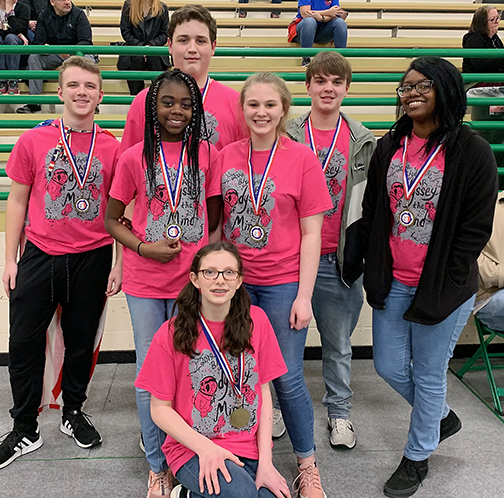 Students and volunteers representing the Blytheville School Districts again stood out at the March 2 Northeast Regional competition of Odyssey of the Mind in Paragould. Four teams represented the district, and all four will move on to the state competition March 30 in Little Rock.
The top four teams in each division qualified for the state event, and Blytheville accounted for three first-place wins and one second-place finish. “We all had a great OM experience at Greene County Tech, and now we’re excited to be going on to the state competition in Little Rock,” said Diane Hay, Blytheville’s Gifted and Talented administrator, which includes OM. “Our schools are very fortunate to have so much community and parent support from individuals who serve as coaches and judges, and I’m delighted that the ones who served as judges in the regional competition will fill those same roles for the state event.”
This year, added Hay, Blytheville’s four teams had some fun problems to solve.
The structure problem this year was “Structure Toss.” Over the years OM teams have designed structures that changed into an abundance of unbelievable shapes and sizes that balanced and held as much weight as possible. This year teams must strategize risk for points and “toss” their structures in this year’s problem-turned-carnival. They use a device to propel the structure in a carnival game. If it travels in the air it gets a higher score. Once the structure has been successfully tossed, it can be tested for strength. A carnival barker character will entice other characters to join the fun during a performance that incorporates testing the structure’s strength with creative games of skill and chance.
Blytheville’s Structure Toss teams consist of: Div. I (coaches Curtis Walker/Curtis Walker, Jr.) students McKinley Walker, Ryley Walker, Jordan Holton, ZyRiHanna McNear, Kadyn Herron, Brody Lynn and Marley Rand.; Div. II (coaches Curtis Walker/Curtis Walker, Jr.) students McKinley Walker, Ryley Walker, Marley Rand, Hayden Cornwell, Jordan Holton, Zoe Hearty and Gatsby Langston Brown, and Div. III (coaches Amy Louise Gullic, David Gullic and Susannah King) students Gatsby Langston-Brown, Wills Gullic, Shamari Cooper, Diamond Henry, Connor Frazier, Katy Pruett and Jacob Pruett.
The Classics team this year was entitled “Leonardo’s Workshop.” Imagine how inspiring Leonardo DaVinci’s workshop must have been. Teams will portray his workplace in an original, creative performance that includes DaVinci, a patron and a naysayer. The team will recreate a DaVinci painting, make a three-dimensional representation of one of his works and recreate another LDV work in any form the team wishes. There will also be an original “debunked” creation that LDV “invented” but discarded because it was mocked. Ironically, the item will be shown as something commonly used in modern times.
The Classics team is comprised of Div. I (coaches Megan Trucks and Crystal Vincent) students Emmaly Allen, Rezo Jefferson, Markia Lea, Rico Moore, Jace Vincent and Ayden Allen.
“While this team did not place in the top four to advance to state competition last year, let me say that it ‘blew away’ their competition and scored a second-place win! They were so excited. This will be their first time to compete at the state level.”
Our volunteer judges for this year are Paige Hawks, Ashley Whitley, Rae Galbraith, Eddie Hobbs, Deborah Patterson and Lou Riggs.” We really appreciate these volunteers, because without them our teams would not be able to compete, she stated. “We need all the volunteers we can get each year. “Our most important need is volunteer coaches. So many of our students aren’t able to compete because we can’t find enough adults to volunteer to coach them. It’s not hard to be a coach. There is a one-day training available (not mandatory), and the students will do the work as you simply act as their guide and “go for” person.”