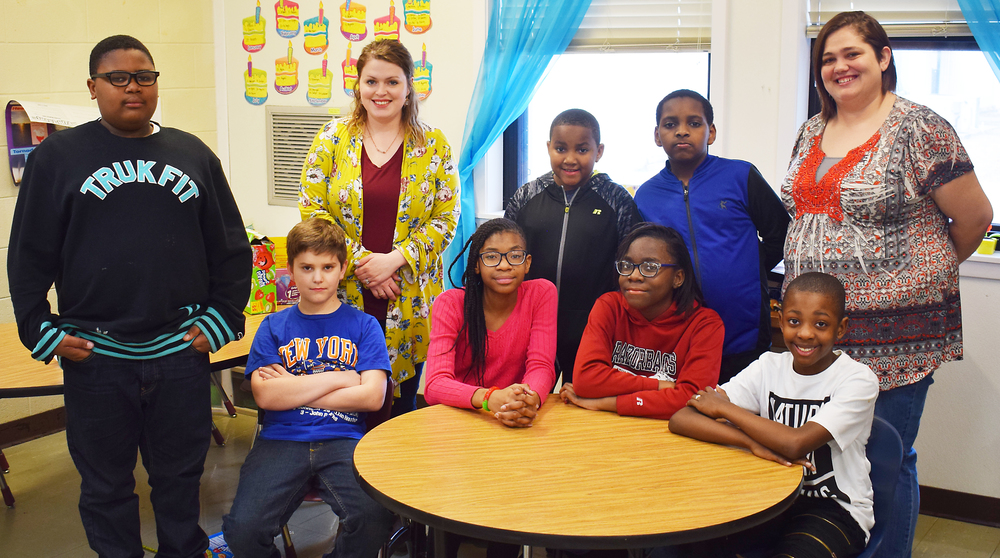 Members of the Odyssey of the Mind team from Blytheville Elementary School, who will compete March 2 in the Northeast Regional Division I “Classics” at Greene County Tech Intermediate School in Paragould, are (front, from left) Steffond Blankenship, Jace Vincent, Emmaly Allen, Markia Lea, Rico Moore, (in back, from left) coach Megan Trucks, Ayden Allen, Rezo Jefferson and coach Crystal Vincent.

Megan Trucks contends that her first year as an Odyssey of the Mind coach was a learning experience, “not just for me but for all the students”. Now that she is a more experienced “seasoned pro”, Trucks still won’t predict any titles when her students participate in the March 2 regionals, but she will say that the team members will be a lot more prepared.
Trucks, third grade teacher at Blytheville Elementary School, and her students are busy preparing for the regionals, which will be at Greene County Tech Intermediate School in Paragould. In addition to the BES team, three other squads will participate in OM activities from the Blytheville School District; Curtis Walker and Curtis Walker, Jr., are coaching two teams from BES, and David and Amy Louise Gullic and Susannah King are leading the team from Blytheville High School.
The OM state event will be March 30 at North Little Rock High School, and the World Finals are scheduled for May 22-26 at Michigan State University in Lansing.
OM director Diane Hay a year ago e-mailed everyone from the district, asking  for volunteers who would be willing to serve as coaches. Trucks, who has been at BES for four years, said she wasn’t sure if coaching was for her, but she needed very little time before saying “yes” to that e-mail.
“I really like teaching elementary children, but I’ve always found it sad that extracurricular activities for them are much more limited than for high school students,” Trucks stated. “I was also intrigued by the creativity aspect of OM; I wanted to learn more about that, and serving as a coach definitely gives me that experience. When I became a coach I knew nothing going into it. I had no idea what to expect and neither did any of my students. Now, we are all a little more at ease because we will have done this before.”
Trucks will also have a capable “co-coach” in Crystal Vincent, someone she said she could not even attempt to try without. At practice on some Saturdays as well as weekdays after school Trucks will often work with half the team and Vincent the other half, and together they probably get about five times more work done. “The way we do it, this is definitely a two-person job,” said Trucks.
Hay brought out that Trucks and Vincent’s team missed qualifying for the state event by five points, but the students worked so hard this season and it shows. “We were all cheering them on (last year) because we just knew they had at least third place,” said Hay. “The team had a wonderful skit and the backdrops were so good, the costumes were outstanding and the performance was adorable. But sometimes another team will edge ahead with a few points from another part of the program, and that is so disappointing.
“I have faith in this little group. They are working on their spontaneous portion of the competition, which could really make a difference in the scoring - and that is what will take them on to the next level this year. OM teams usually always bounce back with a vengeance … and this one will. As the saying goes, behind every team is a great coach; this team has TWO great coaches.”
The team consists of six fifth-graders: Emmaly Allen, Markia Lea, Steffond Blankenship, Rezo Jefferson, Rico Moore and Jace Vincent, and third-grader Ayden Allen. One fifth-grader, Trynyty Brown, moved prior to Christmas but Ayden Allen has filled in admirably. Ayden wanted to try OM because of his older sister Emmaly. “Ayden does have a speaking part, which makes him a little more nervous, but he has been a big help with props and also giving ideas to the rest of the students,” Trucks continued.
The team members will participate in Division I “Classics” based on the works of Italian inventor/painter Leonardo da Vinci, who has been called the “father of paleontology and architecture. Trucks stated that the students have already done much research on da Vinci, and a book borrowed from teacher Deborah Patterson has been a big assistance.
The students have met a couple of Saturdays and also a few times after school, but Trucks said they chose this OM problem because of the historical significance. “As it turned out, they have really enjoyed learning what they could about da Vinci,” she said. “I also believe our team will do well at the regionals. Last year we struggled with our Spontaneous problem even though we did well with our long-term problem. This time around we should be ready to compete.”