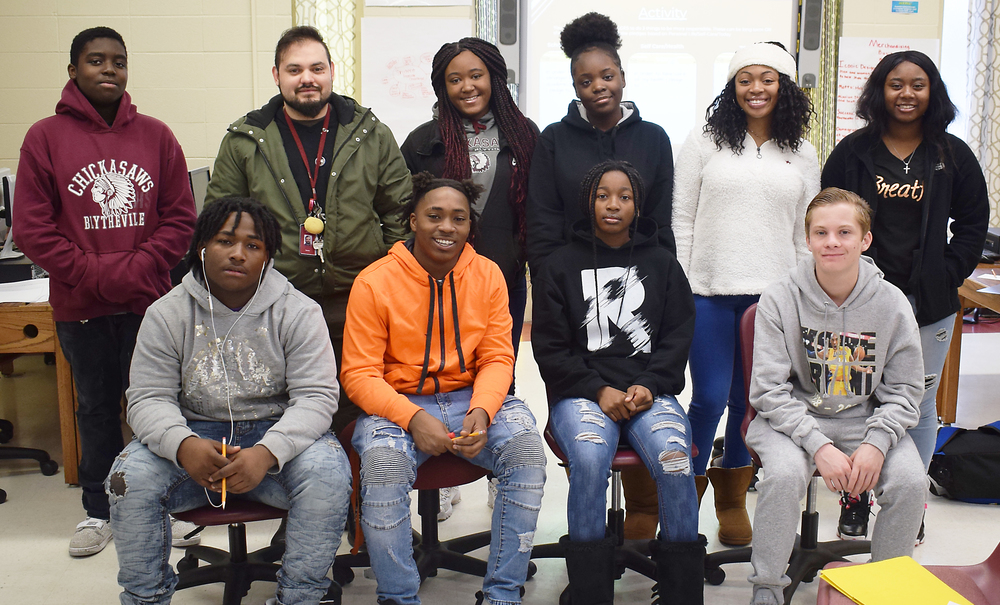 Research indicates that when high school students have a meaningful relationship with an adult at school, that student is more likely to succeed academically. That’s the thinking behind the Advisory program at Blytheville High School New Tech, which Alex Garcia says is the support to help students in their personal lives, academic lives, social and emotional intelligence.
Because traditional learning in high school often leaves little time for adults and students to make these connections, years ago schools began to take a greater interest in building more meaningful relationships between teachers and students, and one approach was the creation of what are known as “advisories”.
The Advisory team at BHS New Tech consists of eight administrators and teachers. Former literacy teacher Lena Pierce began the Advisory team last year because she wanted to implement an Advisory program at the school. Pierce moved to the counselor’s position at Blytheville Elementary School for this school year, and Garcia was asked to take the position. Therefore, Garcia and the team began making plans for the program to begin at the start of the second semester.
Core beliefs of Advisory, he said, include Advisory strategies benefitting the students, the fact that relationships are essential and BHS’ responsibility, and also that the community is a vital partner and stakeholder in the school’s process.
Forty-seven Advisory groups began meeting Jan. 9 and will continue to meet throughout the rest of the school year. Each Advisory group includes one teacher (advisor) and nine-12 students. Advisory is each Thursday from 8:55-9:35 a.m. Every month includes a theme and each month students will get two lessons, a gym activity and auditorium activity. For the gym activity the advisory groups rotate through various team building activities, and college and career coaches Jeff Echols and Robilyn Key help plan and coordinate panels and discussions for advisory groups in the auditorium.
Last month’s theme was “Trust”, this month the theme is “Academic Engagement and Responsibility”, March’s theme will be “Respect and SocioEmotional Intelligence”, and the themes for April and May revert back to Responsibility and Socio-Emotional Intelligence.
Each Advisory Group includes students from just one class. Garcia is responsible for several sophomores, and in their February discussions the students talk about what responsibility is and the different kinds of responsibilities.
“BHS Advisory values the whole student by investing in their academic, career, social and emotional growth so that we promote learning outcomes that matter”, added Garcia. “At BHS we want the teacher-student relationships to be No. 1. We have general meetings which involve the entire class, but the one-on-one meetings center around the academics of the students. As teachers we believe “change” should happen, and Advisory gives teachers the opportunity to build relationships with the students.”
He also said that although every teacher is an advisor, not every advisor is a teacher. Nurses, counselors and paraprofessionals are among the advisors at the high school. BHS New Tech is among the “outside the traditional box” public schools that has Advisory.
Garcia went on to say that all advisors will demonstrate respect, responsibility, academic engagement and socio-emotional intelligence in their academic and larger community.
Advisory at BHS New Tech is one of the few places in high school where room exists to deliver high-quality social and emotional learning without adding an extra responsibility to already-packed high school schedules.