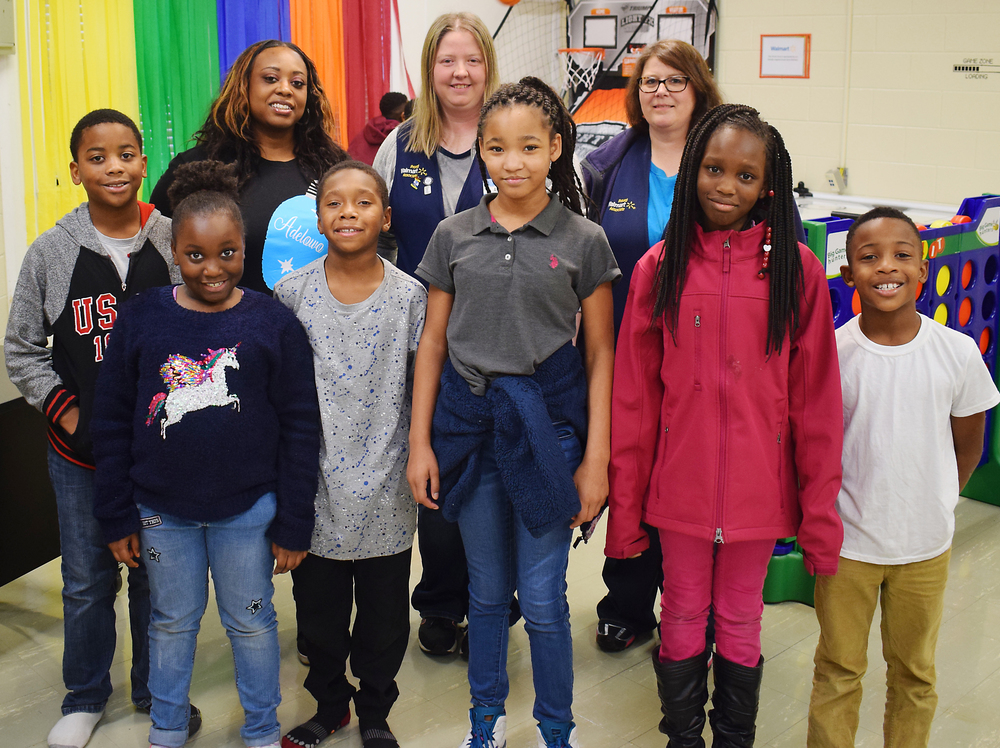 Walmart representatives on Dec. 13 visited the grand opening of the “Chicks Zone” entertainment center to watch students from the “Demonstrating Appropriate Behavior” program at Blytheville Elementary School as they relaxed and had fun playing the room’s games and activities for a while. Pictured are (front, from left) Bryan Lemons, Cemia Tye, Ty’shawn McGee, Raevyn Jackson, Shanaia Campbell and Zion Mason, and behind them are (from left) BES assistant principal Shayla Adelowo, April Hollis of the “People Lead” Human Resources of Blytheville Walmart, and Blytheville Walmart OTC Department manager Patricia Vancey. Mason, Campbell and McGee are all graduates of the school’s “DAB” program.

Shayla Adelowo organized a “high-tech” game room inside Blytheville Elementary School that she believed would allow the students to temporarily leave the worries and concerns of typical grade school life and, at least for 30 minutes, do what they would normally do at home. This “experiment”, or implementation, proved so successful that Adelowo would like to open up the room for all students.
The “Chicks Zone”, a former classroom now turned into a game room that includes a television and video games, air hockey table, basketball goals and board games, is unlike anything in the school, she commented. The room was created for students who are a part of the “Demonstrating Appropriate Behavior” program, an extension of the school’s Positive Behavior Interventions and Support” program.
Adelowo, assistant principal at BES, applied for a Walmart Community Grant last June, with an idea for the Chicks Zone that she believed could improve the students’ negative behavior at BES. Toward the beginning of the school year she was informed that the school would receive the $1,500 grant “to support your work in the community and share your desire to provide local impact”.
To gain access to the Chicks Zone, a DAB student must score at least 75 percent of his or her goal set by the Response to Intervention - Behavior team, correctly answering three-fourths of the questions regarding his or her goals and what he or she wants to do with their education at BES. A daily point log tracks the students’ behavior. “On some field trips out of town our students have gone to places like “Chuckie Cheese”, “Incredible Pizza” and “Hijinks”, and have been able to take in the games and activities at those locations,” Adelowo stated. “That’s why I helped create the game room at BES, to give students the opportunity to get away from their studies and just enjoy having fun in this area.”
The Chicks Zone opened Oct. 3, and Adelowo went on to say that the turnaround for the students has been “huge” because of the difference she has seen in their behavior. “In fact, some of the students are even beginning to hold others accountable,” she said. “The students want the others to be able to have the same reward they are receiving, and for all of them to go into the Chicks Zone together.” The behavior of some students in fact has been so remarkable that they were able to graduate from the program Dec. 6.
The Chicks Zone grand opening was Dec. 13, and Adelowo invited Supt. Bobby Ashley, members of the Board of Education and local Walmart administrators and employees to witness how the Chicks Zone funds were spent, and to see the students playing those games and enjoying themselves.
Adelowo said she plans to open the Chicks Zone in January to all BES students in 30-minute increments who have no office referrals. She also added that she wants to expand the zone to include even more games and activities for the students. “The PBIS representatives have already contributed some games for the room, and that is wonderful,” said Adelowo. “And we welcome even more contributions to the Chicks Zone.”