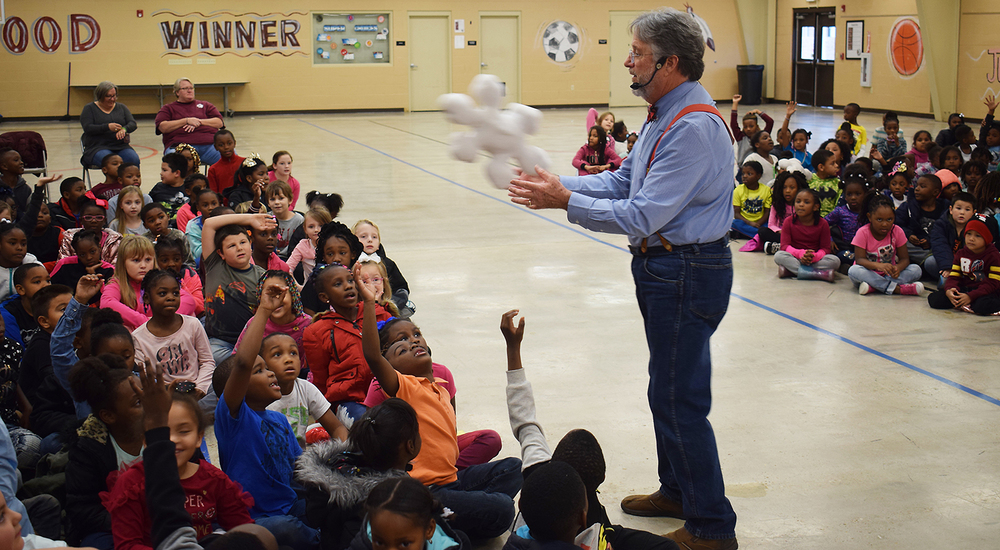 Even with busy schedule, performance for BPS special to Kinders

The Blytheville Primary School students and, for that matter, the teachers look forward every year to mid-November because that’s when Brian and Terri Kinder and their music program come to the Multi-Purpose Building. The program this year was Nov. 22, and the pre-kindergarten-second grade students filled the building during the afternoon to get up-close looks at the Kinders, interact with them and just enjoy “being kids”.

The program is very special for the Kinders too, since BPS has had them perform every year since 2009. Brian Kinder having “retired” from the Little Rock School District 11 years ago, the Kinders now perform 275 programs every year including stops throughout Arkansas and Missouri, Louisiana, Oklahoma, as far south as Florida and as far north as Nebraska. The Kinders will have 39 programs from Dec. 1-20 alone.

Brian Kinder, from Fredericktown, Mo., began as a music teacher in the Little Rock area in the 1980s, and was instrumental in writing songs for the students while they performed in school plays. During one chance meeting with Jan Wolfe, a fellow teacher and puppeteer, he was encouraged to start performing some of his songs.

Terri Kinder had lived in Clinton, Ark., since she was 12. She and Brian became acquainted in the late 1990s, and she assisted him when he began his first program in 2001. She kept on helping him for every one of his programs, and in 2003 they were married.

Despite an increasingly busy schedule Brian Kinder kept on teaching, but he said the summers became especially hectic because of their music programs. Their work with the schools during the spring, fall and winter and their time with the ever-increasing programs in the summer finally helped them to see that something needed to change. So in May 2008 Brian Kinder retired, and both of them put all their energy into their music programs.

Kids Should ‘Be Kids’

The Kinders begin each program with their signature song “I Like Being a Kid”, and they will also transition to songs having to do with holidays including Halloween, Thanksgiving and Christmas. Their goal is that the students have a lot of fun at their programs and enjoy just being themselves. “We want to encourage all the children who listen to us to enjoy being kids and to feel good about themselves,” said Terri. “We also recognize the impact the teachers have on the students’ lives, and our hope is the students will come to appreciate everything those teachers try to do for them.”

“Snowflakes” is one of 180 songs the Kinders have written, and Brian stresses this in his song every time he performs for the BPS students, throwing a few “snowflakes” into the audience and the students throwing them back. “The children that listen to us are like snowflakes; they are each one of a kind, and yet every one is different in some way,” he said.

“Self-esteem is very important to children,” Terri continued, “and every child must know that he or she is very special. And along with that, children need to know that while they’re at school they must follow directions.”

The Kinders use a number of inflatable props during their programs to spotlight the current holiday season, props that can be aired up to resemble the holidays and later deflated, put back into suitcases and hauled into a minivan they drive to the next program. During other programs they engage the children with other visuals such as puppets and teddy bears. Brian added that when they use the props they try to make them as colorful as possible to help keep the students engaged.

More and more students and teachers know the Kinders’ music, and they sing and hum their tunes both just before the program each year and especially after, so much that in 2017 the Kinders were nominated for a Grammy Award for their “Kinder Lullaby” CD. They did not win, but Brian Kinder had an interesting take on the experience: “We were eliminated from the Grammys at the same time as recording artists like Justin Timberlake and Dolly Parton”, he told the BPS students and teachers, “so if that’s the case then we are in pretty good company.”

Brian added that when the Kinders left the Little Rock Schools they had to “beat the bushes” to make the public aware their program was available. That is no longer the case, and in addition to school programs the Kinders continue performing for churches, festivals and birthday parties. And what they aim for now is to make certain every child who attends one of their programs has positive childhood memories.

“A friend is someone who wants to be remembered when he or she is gone,” Brian said. “Some day, when we’re no longer here, we want the children to always have good childhood memories of us, and we hope those kids will still be singing our songs. That way we are friends to all the children we meet. To me, that’s what a friend is supposed to be like.”