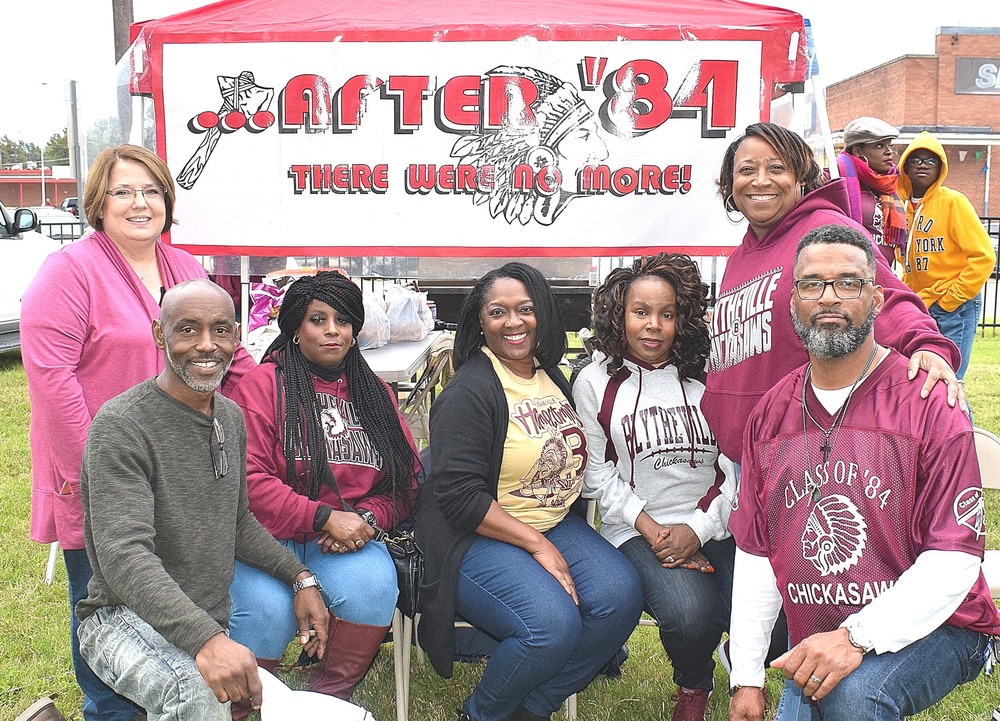 Members of the Blytheville High School Class of 1984 posed last Oct. 12 for a group photo during their reunion just before entering the Valley View-Blytheville homecoming game at Haley Field that evening. BHS Student Council sponsor Dasnee McChristian stated that reunions by the classes of 1979, 1984, 1989, 1991, 1994, 1999, 2005 and 2009 have already scheduled reunions, which will start with tailgating activities Friday just outside of Blytheville Middle School and continue through the weekend. The Chickasaws will host Greene County Tech for homecoming Friday night.

One weekend from now the Blytheville Chickasaws will entertain AAAAA-East foe Greene County Tech in their annual homecoming game. This will give the Chickasaws the opportunity to capture a much-needed victory in the conference standings, celebrate the homecoming queen and her court and provide the many out-of-town graduates the chance to get together with their former classmates for reunions.

Homecoming Week officially kicks off Tuesday morning at BHS, with school out Monday for Fall Break, and teacher/student council sponsor Dasnee McChristian is eager for her students to assume leadership roles regarding several of the happenings at their school. “This year I’ve been as insistent as I could be about the students being involved and ‘active’ for homecoming,” she stated. “And on that Friday I really hope every person at BHS will wear maroon and white, cheer for the Chickasaws during the game and represent pride in their district.”

The Homecoming Week theme is “Cage the Eagles”, created by the student council members. “I like how they are owning Homecoming Week and doing everything possible to ‘inject’ that pride among the other students”, McChristian said. “I gave all the information about this week to the members back on the first day of school, and they ‘took it from there’”.

Spirit days, with the students dressing similar to the persons they feel most connected with, will start Tuesday morning with “Squad Day”, as students will dress alike as in “Twin Day” last year. Wednesday is “Sadie Hawkins Day”, with the boys dressing as girls and the girls dressing like the boys. According to McChristian, Thursday will be “Internet Sensation Day”, as students will come to school dressed as their favorite Internet personalities. Friday will be “Spirit Day”, with students wearing maroon and white clothing in honor of the Eagles-Chickasaws game later in the evening. In a tradition unique to Blytheville High School, a senior will beat the Chickasaw drum throughout Friday.

The powderpuff football game, in which the girls will play two flag football games and the boys will serve as coaches and officials, will be Wednesday at about 1 p.m. Admission will be one dollar per person, with the money being used by the council members for expenses related to Homecoming and the prom next spring. The games will feature the freshmen playing the sophomores, with the survivor going against the seniors for the powderpuff championship. McChristian said the junior class members chose to forfeit their Homecoming Week points for this event since they are not fielding a team.

McChristian stated that each of the classes will be responsible for decorating a BHS hallway during the week, with various community individuals to judge the hallways Friday morning. The seniors will decorate the “300” hall, juniors the “400” hall, sophomores the “500” hall and freshmen the new wing of BHS. The hallway decorations will commence Thursday after school.

The homecoming pep assembly will be Friday in the BHS Gym at approximately 2 p.m., and that will include the presentation of the maids and their high school escorts and the crowning of the homecoming queen.

The Homecoming Parade will be Friday at 4:30 p.m., with various students and citizens riding on the the floats, classic automobiles and motorcycles, which begins near Cobb Funeral Home on Main Street. Contact McChristian or BHS employees Audrey Parker or Norma Valley at 762-2772 for more information about the event. School organizations and individuals will begin lining up for the parade at 4 p.m.

Finally, pregame festivities featuring the homecoming queen and her maids escorted by their male relatives will be presented at approximately 6:30 p.m., with the football game to start immediately afterward. The winner of Homecoming Week will be the class members who have earned the most points, and will receive the “Spirit Stick” from student council president Te’onna Washington. The presentation will be announced during the game’s second half.

“From the theme of Homecoming Week to Spirit Day to the decoration of the hallways, this week will be very successful for BHS,” concluded McChristian. “When plans for the week were created, we wanted the students to choose what they wanted for BHS. I believe we have done that.”