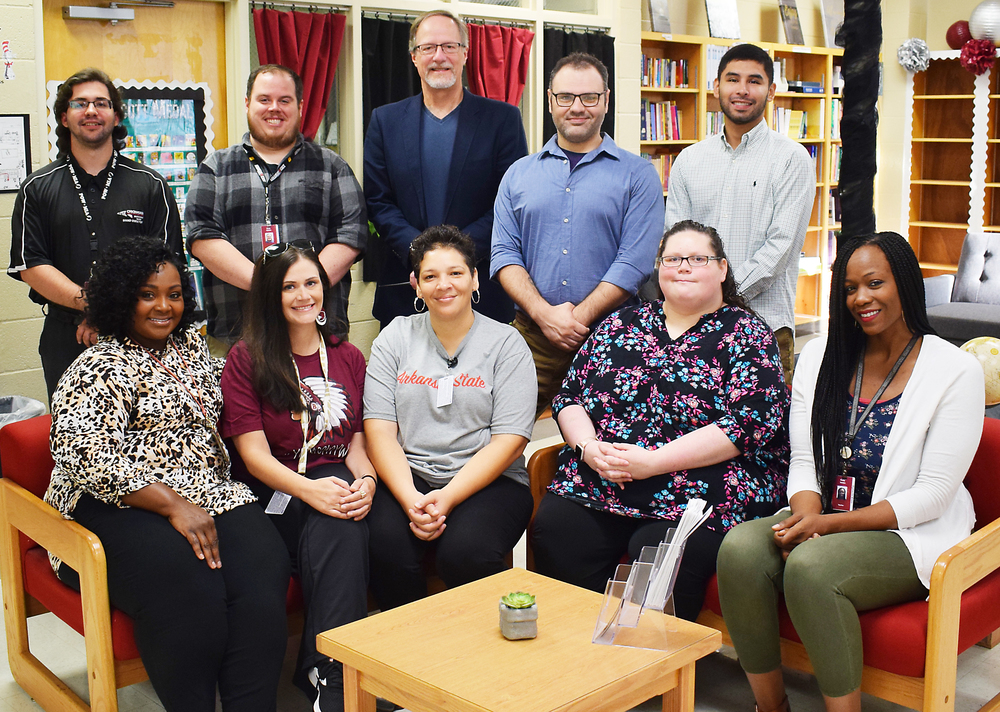 Mike Wallace has always been proud of the teachers at Blytheville Middle School, and he is particularly happy with the nine new and novice instructors who are beginning their first school years at BMS. In fact, Wallace believes these teachers could wind up being his best new group yet.
In talking about his teachers Wallace, principal at the Middle School, lists two primary reasons for believing these individuals are fitting in perfectly at BMS. “I am impressed with the knowledge of their educational content,” he stated. “I have also been very impressed with their instructional strategies, and a lot of that is due to them participating in our district’s professional development. In my 11 years as a BMS principal I have never seen novice teachers that have the kind of grasp on professional development that these have. It’s just a good, quality group.”
The nine new or first-year teachers at the school include BMS Band director Justin Gavito of Ward, math teacher Scott Corbin of New York, social studies teacher Timothy Johnson of Paragould, science teacher Danny Salazar of Jonesboro, literacy teacher Ebony Wells-Brown of Blytheville, math teacher Erica Weathers of Jonesboro, math teacher Krisner Smith of Helena-West Helena, special education teacher Danielle Spears of Paragould and strategic reading teacher Ruby Vaden of Luxora. Vaden and Wells-Brown are experienced teachers from Blytheville Elementary School, and Brown was the district’s 2018-19 Teacher of the Year.
While a brand-new teacher comes directly from a college or university or has been in non-educational employment, a novice teacher has less than three years experience at a previous school.
Wallace went on to say that he has also been quite impressed with the teachers’ classroom management skills. “I’ve been involved in several class walkthroughs with the teachers just this fall, and I’ve been amazed at how high their student engagement is,” he said. In some of those walkthroughs that student engagement is close to 100 percent.
“These new teachers have well-prepared lessons when they come to school, and they lead their students in relevant materials. I saw several of these teachers while they were in summer school, and it was easy to see that they showed flashes of educational brilliance even then.”
Vaden, according to Wallace, spent two years at BES and will also be an assistant coach for the Blytheville Lady Chickasaws basketball team beginning in the fall. Wallace also expressed how excited he was for Wells-Brown to now be at BMS after coming from Blytheville Elementary. Krisner Smith is a novice teacher, having taught last year at the Barton-Lexa School District, and Erica Weathers comes from an education family, as her grandmother Charlotte Weathers Griffin taught for several years at the old Blytheville West Junior High School, and her aunt Retha Weathers was a home economics teacher at Blytheville High School.