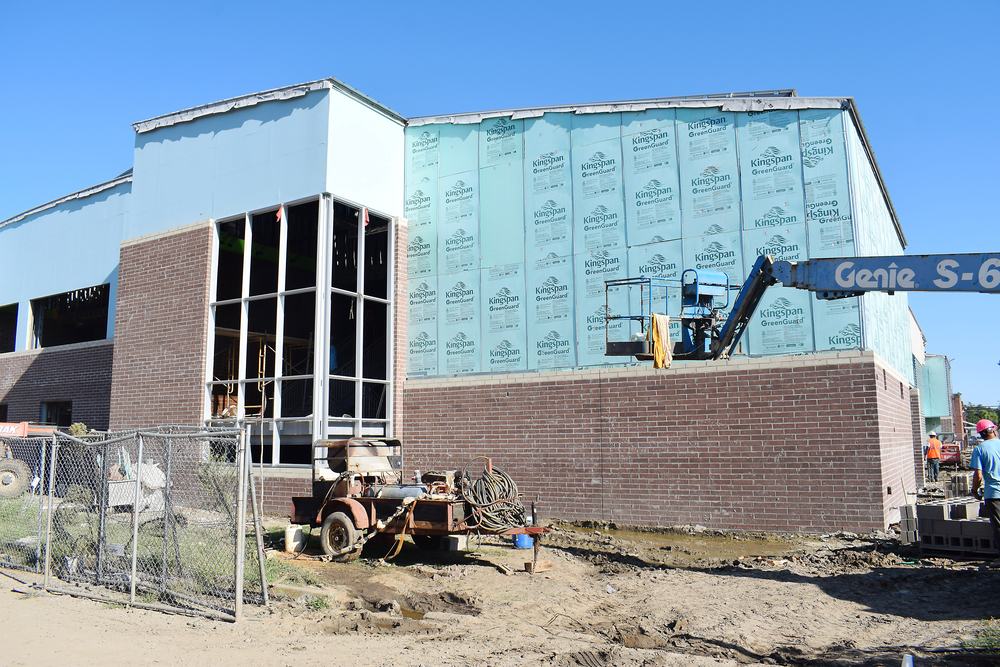 Construction on the brand-new 2,200-seat Chickasaw Arena by Baldwin & Shell employees continues on the Blytheville High School campus. In fact, construction is 75-percent finished, and once the windows are completed and the air conditioning is installed, the arena will be ready for the flooring and bleachers. Supt. Bobby Ashley stated that Chickasaw and Lady Chickasaw basketball teams should be playing in their new home by January.

Activity for the new Chickasaw Arena, directly north of the Blytheville High School Gym, continues as Baldwin & Shell Construction employees keep working amidst the hot, humid days of July and the ever-present chance of showers and thunderstorms in August and September. In fact, the last report given to Supt. Bobby Ashley by Bo Johnson, superintendent of Construction, is that the brand-new 2,200-seat arena is three-fourths completed.
“There are some aspects of the arena that still need to be addressed, but I believe the Chickasaw and Lady Chickasaw basketball teams will be playing in their new home at least by January,” Ashley stated.
Chief among the accomplishments by school officials is their contract with Pepsi MidAmerica, which will install its vending machines at each school in the Blytheville District. The district signed a 10-year agreement with Pepsi, not only to sell Pepsi snacks and beverages throughout the district but to have exclusive access to sell only Pepsi products at both the arena and Haley Field during football games. In exchange, the district received $50,000 that will be used for a traditional scoreboard above center court in the arena as well as other necessary arena items.
Ashley added that Baldwin & Shell employees still need to complete some concrete and metal work, and also instill windows throughout the arena’s outside. Kris Williams, the district’s director of Title I and Technology, stated that some drywall work and the air conditioning system must be completed, and then the arena’s flooring and bleachers will be installed.
The four-sided scoreboard will be visible from any place in the arena, and the scorers’ table will include LED lights that can show team logos and various player information. “This Chickasaw Arena will be a ‘state of the art’ facility, with all the ‘bells and whistles’, and it will be something our community will be very proud to have and call its own,” Williams said.
He went on to say that the actual arena will be “very close” to the artist’s rendering of the arena that sits on the northwest corner of the lot, but Ashley said the district will not take control of the arena until every detail has been completed and Baldwin & Shell officials release it to the schools. The BHS Gym will continue to be used in November and December during the non-conference part of the basketball schedules.
Ashley said that although some individuals have discussed possibly tearing down the old BHS Gym to create a parking lot for fans and school supporters who come to the new arena, that won’t happen - at least, not just yet. “We’re still going to have students coming to the gym for physical education, and it’s very possible the district could even rent the use of the gym to other organizations for their use,” he brought out.
“I do know that the Chickasaw Arena will be a ‘beacon’, a ‘shining light’ for the community. It will be the biggest venue for both sporting and other school events in Mississippi County.”