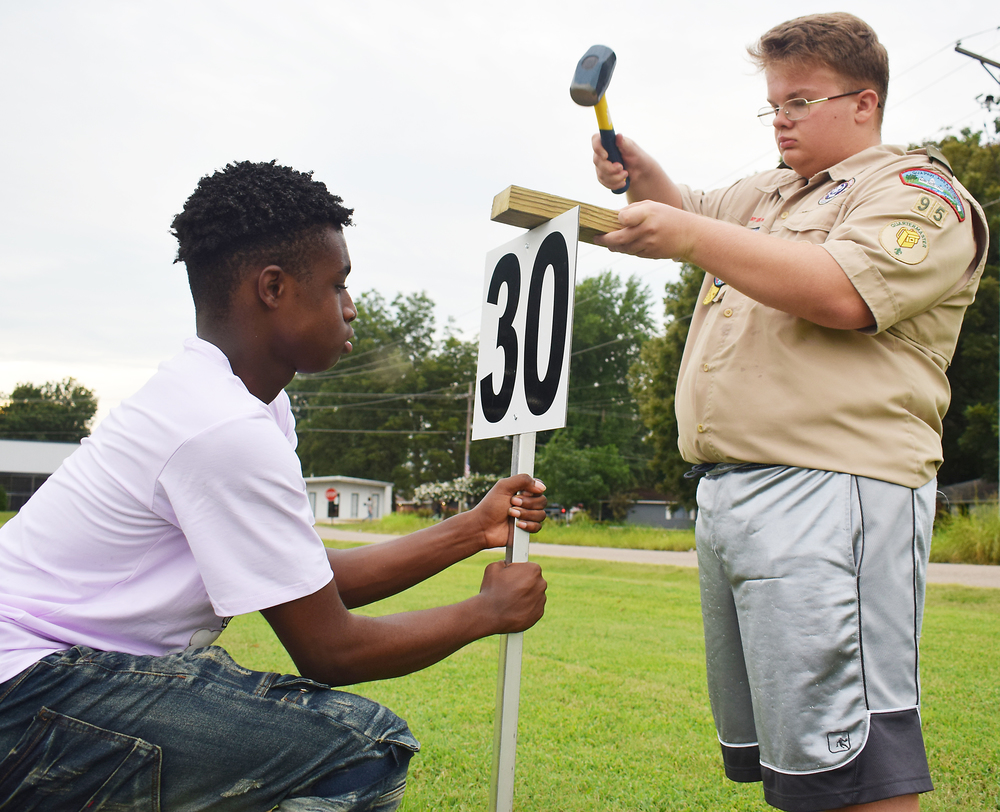 Dylan Buckner hammers one of the yardage signs into the turf of the Blytheville High School practice field, with Demetrius Goings holding the sign steady for him. Buckner, a sophomore trumpet player with the Chickasaw Marching Band and also a member of Boy Scout Troop 95, gathered all the materials for his Eagle Scout project of making yardage signs for the band’s practice field. He spent the spring and summer getting opinions from everyone associated with both the school and Scout Board, and only recently installed the signs. Buckner and Goings are both sophomores at BHS.

Dylan Buckner spends a lot of time working with the Blytheville High School Band at the practice field behind the Blytheville School District’s Band building, so it was just natural that when he started his Eagle Scout Project he thought of something that could bring together his attraction for the band and his love of the community.
Buckner, a sophomore trumpet member in the BHS Band and also member of Boy Scout Troop 95, recently constructed and then placed football yardage signs on the 85-yard field where the Chickasaw Marching Band practices. The signs will remain on the field through the band’s marching season, which should last through November. Buckner designed, built and installed the signs, with Dale Hinson Sign Company donating all materials and supervising construction.
Connie Simpson, Buckner’s grandmother, stated that the signs enhance the practice field and guide both the band members and director of Bands Janet Rooney, with both Rooney and the members being able to see where they are while going through their routines. “The signs are made of aluminum, with decals for the actual signs, three-foot aluminum posts and plastic plugs for the posts,” she said. Each sign is held together by two screws.
Simpson added that each Eagle Scout Project has to be non-profit and also benefit the community. “In this case Dylan had to implement the planning and get information from everyone involved, including Rooney, Supt. Bobby Ashley and (former BHS principal) Matthew Swenson,” she said. “The project also had to be approved by members of the Scout Board in Jonesboro.”
Boy Scout Troop 95 of Gosnell is a member of the Crowley’s Ridge District of the Quapaw Area Council.
“Even though I’ve only been a member of this band for a couple of years, I’ve learned a lot that will help me as I get older, including the possibility of a scholarship” Buckner emphasized. “As a member of the Boy Scouts I’ve also learned many things, including life skills. The leaders in the Boy Scouts have taught me a lot, and if I can acquire my Eagle Scout certification a lot of ‘doors’ can open up for me.”
The goal of an Eagle Scout service project is for the person to plan, develop and give leadership — however long that takes. That's why there's no requirement for a minimum number of hours that must be worked on an Eagle project. Eagle Scouts value perseverance, discipline, motivation, leadership, accountability and achievement, and those lead to tangible benefits. College admissions officers recognize the award and consider it in their decisions.
Buckner claims he at first thought of the idea for the yardage signs “in about five minutes”, and the idea to put the signs on the practice field was part of his plan. However, approximately three months were needed for his Eagle Scout Project idea to be approved, and another two months before it was completed.
Rooney said that although the previous yard markers on the practice field were good, the ones Buckner made are definitely better because they’re a lot more durable. “Dylan is a good band member,” added Rooney. “He is a dedicated, hard worker. “The decision to give the band these yard markers was his entirely, and all of us really appreciate his efforts.”