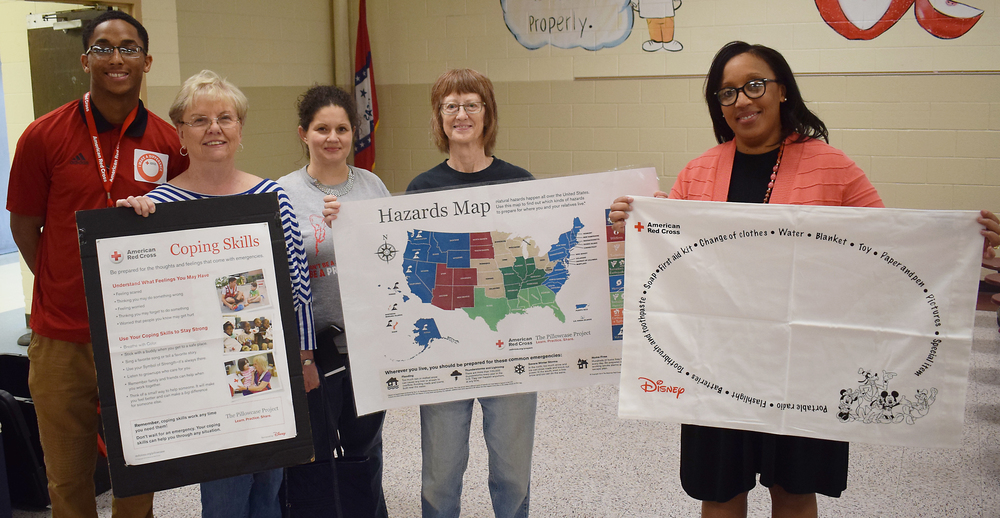 Marsha McClain of the Blytheville office of the Northeast Arkansas Chapter of the American Red Cross and other Red Cross associates on May 15 talked to the Blytheville Elementary School fourth-graders about the importance of the Pillowcase Project and natural disasters, especially fire and tornadoes. Pictured are (from left) Ignatius Griffin, Sherry Griffin, Kandy Hart, McClain and BES principal Chanda Walker.

Fourth-graders in Shenia Culp and Ebony Brown’s classrooms listened intently, and sometimes even had a little fun, as representatives from the American Red Cross Northeast Arkansas Chapter explained the Pillowcase Project. The project is aimed at helping others who may be suffering from natural disasters, especially tornadoes and fire.

Talking to the students about the Pillowcase Project was Marsha McClain of the Blytheville chapter, Sherry Griffin of Dell and Ignatius Griffin and Kandy Hart of the Craighead County chapter.

The Pillowcase Project was created by the American Red Cross in Southeast Louisiana following Hurricane Katrina when Southeast Louisiana regional executive Kay Wilkins learned that Loyola University students carried their valuables in pillowcases when they were evacuated for Katrina. This inspired Wilkins and her team to work with an art therapist to create a program in which children living in makeshift communities across New Orleans decorated pillowcases as emergency supplies kits.

The project became a preparedness education program for elementary school students. In just a few years, it was adapted and implemented by several other Red Cross chapters with substantial success. Griffin told the students that the project is all about preparedness, and they should “learn, practice and share” the basics of that preparedness.

“First, make certain your family has smoke alarms and that they work,” she told the students. “In case a fire breaks out in your home, you are to ‘get low’ and go (referring to staying below the smoke). When you do get out, go to a preassigned meeting place and then call 911 as soon as possible.”

In the case of a tornado, which is much more likely because of Blytheville being in the southeastern United States, Ignatius Griffin told the students they should head to either the bathroom, closet or basement, covering themselves with a mattress, blanket or even a shower curtain. He added that phones should remain on and close to them where they can be heard.

Griffin reminded the students that “coping skills” would help in case a student becomes worried or scared during a natural emergency. “People tend to breathe faster when they are emotional during an emergency, so each person should take a slow breath, keeping his or her eyes closed. Then, by opening your eyes, you can keep those good, calm feelings inside you.”