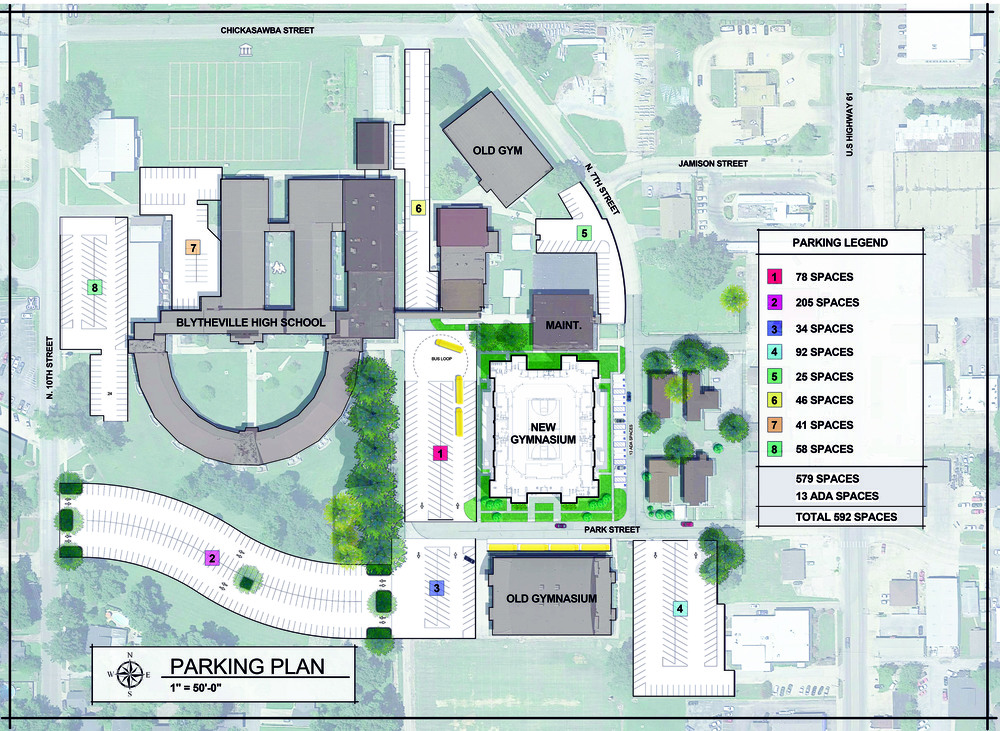 Blytheville School District employees and representatives from Baldwin & Shell Construction in Little Rock and Brackett Krennerick Architects in Jonesboro on Jan. 18 participated in groundbreaking ceremonies for what will be a 50,000 square-foot arena that will be used for Blytheville Chickasaw basketball games and other school-related functions.

The arena, along with teacher raises, is the primary focus of a millage sought by district leaders more than a year ago and passed last June by the Blytheville community. Haley Field was substantially updated because of the millage with artificial turf and general improvements, and the school’s track and field location on Moultrie will also undergo similar significant improvements.

In addition to the square footage, the arena will seat 2,200 persons and include two concession stands on the second floor above the basketball court. District director of Operations Randy Jumper also said that hospitality rooms would definitely be included in the arena, as well as a weight room and several locker rooms.

The new arena will, of course, include new basketball goals, new seats, new weights for the weight room, new equipment for drinks, new popcorn machines, new scoreboards - “and possibly a video board,” Jumper concluded. And, most likely, a person already employed by the district will be used full-time for custodial activities.

Along with Chickasaw basketball events, the court will be used for games by all the junior high and elementary teams, Blytheville High School volleyball team, Area 13 Special Olympic basketball activities each February and various BHS assemblies and pep rallies. The arena will also be used for the annual Effie Lee Terrell BHS Awards assemblies the Tuesday before graduation in May, with the first awards assembly in 2019. “We will also have the graduation next year in the arena,” said Jumper, “but only if rain keeps it out of Haley Field.”

Jumper added that he hopes actual construction just across the street from Haley Field will begin very soon, that basically the Baldwin & Shell employees are waiting for the field to dry up some from the wet winter. “Once the ground breaks, it should be completed in 12-15 months,” he stated. “However, the Chickasaws will still play the rest of next season in the BHS Gym.”

Parking for arena activities should not be a problem, according to Jumper. “Whereas we basically have one entrance to and exit from the BHS Gym, off Park Street, the new arena will give us four entrances and exits - off Park, 7th Street and Chickasaw. A brand-new parking lot very close to the arena, off 10th Street and just in front of the high school, is already under construction and will be used just when activities are scheduled at the arena.”

Jumper stated that the trees on the new 10th Street parking lot would be saved. He also said that due to many persons saying that the old BHS Gym should be saved when the new arena is complete, it will likely also be kept. “A time may come when school officials might want to tear the gym down to create additional parking, but for now it will be maintained,” he added.

The BHS Gym was brand-new for the 1959-60 season, and the district outbid Little Rock and North Little Rock to be the host of the AA-AAA State Tournament. It would be the first time Blytheville was the host for any state tournament. For many years the Chickasaws had played at the Haley Field Gym, but in 1957 plans were begun for a new field house which would result in “a very modern gymnasium”. The Chickasaws eliminated Smackover in the first round of the 1960 tournament but were defeated in the tournament’s second round by Little Rock Central 49-41.