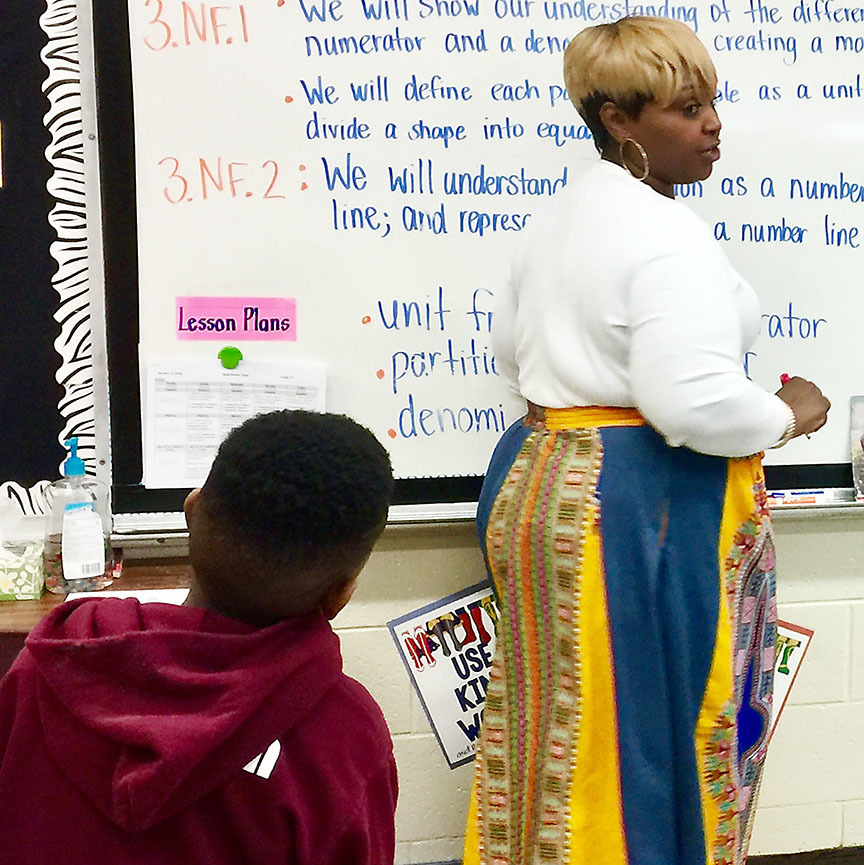 Ebony Wells, third grade teacher at Blytheville Elementary School, guides her students as they try to calculate net force during their study of “Forces and Interactions” in late February. The students learned about net force through an imaginary tug-of-war.

Special to the Blytheville Courier

As part of the Next Generation Science Standards, third-graders at Blytheville Elementary School are now in the middle of a study that a generation or two ago might have been seen as too advanced for them.

The students are studying “Forces and Interactions”, reality-based hands-on lessons as part of the NGSS that were developed by states to improve science education for all students.

“In our study,” said BES instructional facilitator Lauren Starks, “the students are exposed to real-life situations, such as how the motion of an object is affected by a particular force. The students also study balanced and unbalanced forces.”

Starks went on to say that students who demonstrate an understanding of “Forces and Interactions” can plan and conduct investigations and then provide evidence of balanced and unbalanced forces on the motion of an object. “The students use toy race cars, and they will test how the strength of the force affects the distance the object travels,” she said. The greater amount of force that is applied to the car, the greater distance that car travels.”

For example, an unbalanced force on a car, one side of the ball or in a game of tug-of-war can make that subject begin moving, she stated, whereby equally balanced forces pushing on an object will produce absolutely no movement.

Students of third grade teachers Theresa Bentley and Eboney Wells use different methods to expose students to forces and assess their knowledge. Bentley divided her students into groups of three and four each, giving each group a car, stopwatch and tape to mark their findings. The students used four amounts of force - weak, moderate, strong and stronger - and marked how far the car traveled from start to finish. “What the students discovered was that the weaker the force was in moving the car, the more time was required to move the car to the finish line,” Bentley commented. The stronger the force in moving the car, the less time was required to move the car a greater distance.”

Wells taught her third-graders by using a large tug-of-war rope. Under her leadership, the six students - three on each side - discovered that when the two sides are completely balanced, in terms of force, and those forces act in opposite directions, the center part of the rope won’t be moved in either direction. An unbalanced force means that one team will win over the other. She also taught her students how to calculate net force to determine if the force would be balanced or unbalanced by explaining that they should subtract forces that act in opposite directions and add forces that act in the same direction. Starks said that “teachers work hard to plan lessons that integrate math and science within the same lessons so that the students can see the connection between the two subjects.”

Felice Williams’ students discovered the relationship among force, friction and position by experimenting with toy cars, while students in Megan Trucks’ classroom designed bridges that could hold a certain amount of weight.

Williams and teacher intern Abby Rigney instructed their teams of students to push their cars down heights of one to three books, and then to create graphs that went with their experiments. While pushing the car down various heights, created by stacking books,  one book being approximately three inches, limited it to a short distance, pushing it down two and three books (about four and five inches, respectfully) produced significantly more distance. Williams said the students noted in their records that when the cars encountered friction, such as rolling onto a towel, that surface significantly impacted how far it traveled; the cars were able to travel a greater distance when there was less friction.

Trucks’ students were tasked with constructing paper bridges and then stacking pennies on the bridge to test its strength. She stated that most bridges could not support even the weight of a small amount of pennies. Trucks allowed them the opportunity to examine how the bridges were built and to re-design them as needed. “My students learned that the quick way of constructing their bridges is not always the best way to build them, but by re-designing them in the wake of failure they can always make the bridges better,” Trucks said.

Starks continued that the students learned these lessons about forces through “discovery”, hands-on experience. “The teachers want their students to learn through exploring, getting the facts through experimentation,” she said. “Research shows that the more students are able to make real world connections and engage in hands-on experiences, the more students are able to retain information as they see the relevance of the concepts.” She added that only through their investigations can the students learn the importance of controls and constants in conducting experiments.