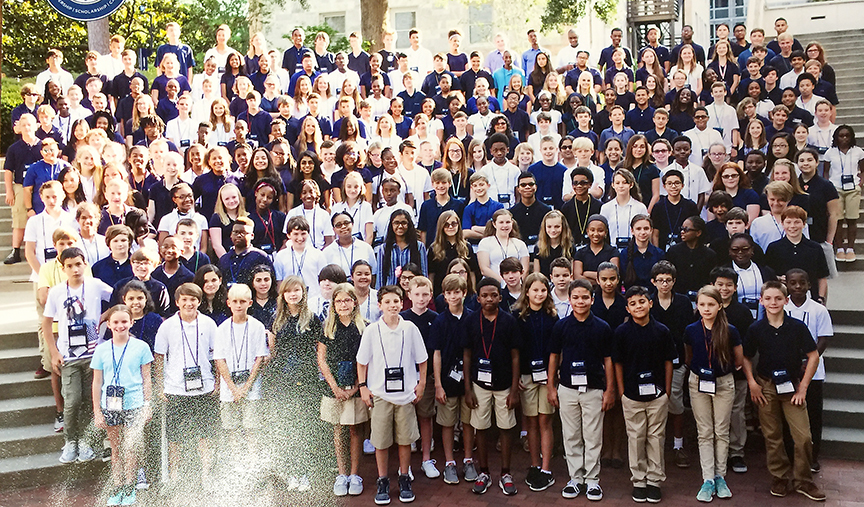 Wills Gullic and participants in the National Youth Leadership Forum: Explore STEM camp, which was July 17-July 22 at Emory University in Atlanta. Gullic is in the extreme upper right corner, back row, second from the right.

When Wills Gullic was nominated to attend the National Youth Leadership Forum: Explore STEM back in February, both he and his parents had a number of questions that related to his education and interest in science, technology, engineering and mathematics. When his parents arrived in late July to pick up Wills after the week of Explore STEM, the only question he had for them was “How soon can I go back?”
Gullic, a seventh-grader at Blytheville Middle School and the son of David and Amy Louise Gullic, was personally nominated by BMS teacher Janet Bennett based on his academic potential and interest in the STEM fields. Explore STEM is an Envision program for middle school students, with Discovery Education working with Envision and other like-minded organizations to foster STEM achievement. High-achieving students may be nominated by a teacher, educator or other community leader, but only those students who can meet the challenges of Envision’s advanced academic curriculum and have demonstrated a high level of maturity and responsibility may attend.
According to information from NYLF, only one in five STEM college students felt that their K-12 education prepared them for their college courses in STEM. That is why Explore STEM provides students with exposure to and experience in the fields that they may not receive in the traditional classroom. This type of early exposure can set students on a path to college and career success by giving them the tools they need to make informed decisions about the future.
NYLF Explore STEM gives high-achieving middle school students an introduction to careers in the highly competitive fields of medicine, technology and engineering. The forum provides students with a broad range of academic and career insights through interactive simulations, hands-on projects and educational site visits, all focused on the theme of planning a successful Mission to Mars.

Leaving for Emory
Explore STEM camps are held at 10 locations throughout the United States, from Los Angeles to Boston to Winston-Salem, N.C. Gullic attended the camp at Emory University in Atlanta. He and his mother flew to Atlanta on July 17 for the weeklong camp, but not long after registering for the camp Amy Gullic said goodbye to her son and returned to Blytheville. “Leaving a 12-year-old in Atlanta, where he didn’t know anyone beforehand, and getting on a plane back home, let’s just say that that was a very hard thing to do,” she admitted.
In a telephone interview with Gullic’s parents last spring, NYLF representatives were told of his interest in engineering, music (band performer) and athletics (baseball, football and golf). “He has a very broad cultural base,” said his father David Gullic. “He loves the History Channel and yet he also likes to cook.”
Capt. Jerry Michael Linenger, M.D., flight surgeon with the U.S. Navy and a NASA astronaut, was the keynote speaker at the July 17 Explore STEM welcome. Private motor coaches provided all transportation during the forum. Students stayed in rooms of two to four, and nightly room checks were conducted to ensure that all students were safely in their rooms. Lights were out each evening by 9:30 p.m.

Wills’ hectic schedule
Breakfast for the students began each morning at 7:45 a.m., and students participated in various Academy events in the Galaxy classrooms such as Explore Space, Explore Subject Strands 1-3 and Explore Careers. They took part after lunch in different labs and Mission to Mars field events, ate dinner in the evening and were in their rooms again by 8:45 p.m. Amy Louise Gullic said later that after Wills took part in all of those activities, he had no difficulty getting to sleep.
David Gullic said that Wills, although he didn’t know anyone before the STEM Camp, greatly liked getting to know the other students who were part of his team because they all had a common interest. “They would ‘pool’ ideas and create, whether it was on how best a robot should move to using software to design a habitat capable of sustaining life on Mars,” he mentioned.
“I was greatly impressed with the interactions with all the classmates,” said Amy Louise Gullic. “They were exposed to so much, and that includes the person who was in charge of them.” She added that the leader of the group of five students her son was a part of was guided by a college student from the Massachusetts Institute of Technology, a private research university in Cambridge, MA.

Now, more ‘thought’
Now that Gullic is back home, he is eager to continue his STEM Camp activities next summer and is already interested in either the one at Villanova University in Philadelphia or the camp at Wake Forest University in Winston-Salem, N.C. The camp at St. John’s University in New York City is also a possibility.
Neither parent believes Gullic’s STEM Camp experience totally changed him, but they admit their son is not quite the same person he was before attending Explore STEM. “Wills has always preferred a structured environment and, fortunately, we have not had to force him to do his schoolwork,” Amy Louise Gullic stated. “But now there is more of a ‘thought’ process to his actions; he thinks about his work a little more than he did in the past.”