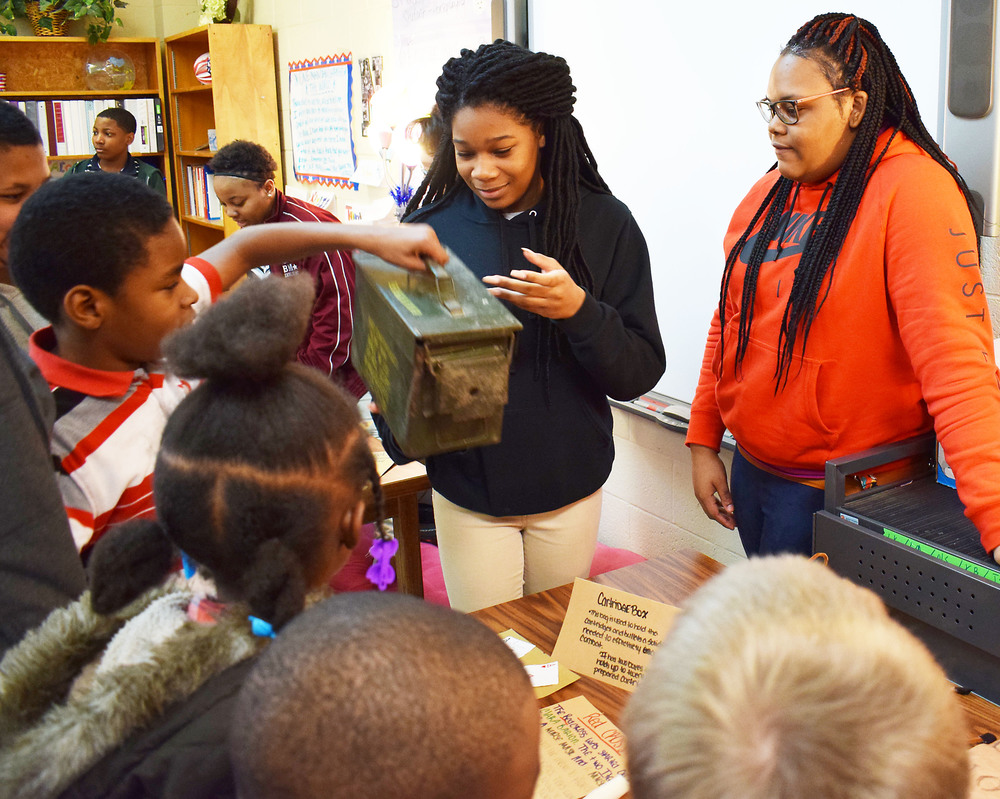 Blytheville Middle School students Asiah Aldridge and Chante Primas show fifth grade students an ammo box that was part of the Civil War scrapbook given to the BES students that teachers hope will help them educationally when they become part of BMS New Tech in two years.

Eighth-graders at Blytheville Middle School spent several weeks during the second semester researching projects and then putting together a Civil War scrapbook that later was presented to Blytheville Elementary School fifth-graders. The project was part of the eighth-graders’ BMS New Tech experience, and the fifth grade teachers also hope the gesture impacts their students as they prepare for New Tech in just a couple of years.
Teachers David Skaggs and Brittany Nettles instructed their students to research and then bring artifacts, or “souvenirs”, that they believed would be helpful in telling stories about the Civil War. The students created authentic-looking artifacts, including nursing outfits and accessories from the mid-1800s, and then chose a person from the Civil War to research and describe to the fifth-graders.
“Our students came up with all kinds of artifacts that helped them tell about the Civil War”, said Nettles. “For example, one student brought a replica of Abraham Lincoln’s wallet, complete with the currency of the day. Students also created U.S. Army officer swords, Union soldiers’ uniforms, various combs and brushes. They wanted to emphasize the day-to-day life of the soldiers and nurses, what those individuals encountered on a daily basis.”
Skaggs also mentioned that the soldiers’ everyday life wasn't all that was emphasized by the students’ artifacts. “Our students researched battles and events of the Civil War as well as significant people of that era, and how those individuals affected the policy of the U.S. then,” he stated.
The only things students were asked not to bring for the scrapbook were actual artifacts and/or family heirlooms that could be lost during the efforts in assembling the scrapbook.
Once the artifacts were collected, the students created their scrapbook and researched what they would tell the fifth-graders about the Civil War battles, soldiers and nurses. Later, the fifth-graders arrived in four groups to listen to what the eighth grade New Tech students told them. Nettles and Skaggs also stated that this was a New Tech showcase for the fifth-graders.
Deborah Patterson, one of the teachers who accompanied the BES fifth-graders to the middle school, was quite impressed with what the eighth-graders did for them. “Our students received a variety of artifacts and scrapbooks made by the older students, and these items will give them an opportunity to develop some background knowledge related to the Civil War,” she stated. “When these fifth-graders begin their study of that period in our country’s history, we think they’ll be able to say ‘Oh, we remember hearing about this when we came over as fifth-graders’.”
“I was very thankful for the fifth-graders coming to BMS to see what the older students are experiencing,” Skaggs said. “For the eighth-graders, I wanted them to understand the formations and effects of public policy on the nation then. I also wanted an increase in presentations and collaborations among the students in these two schools, and that is precisely what materialized.”
Nettles added that she hopes the fifth-graders will use this “scrapbook” as an important resource the next time they study the Civil War. “This would be great for the fifth-graders to actually become the ‘teachers’, where they could take ownership of their education and then ‘pass on’ those experiences to younger students as they become older.”