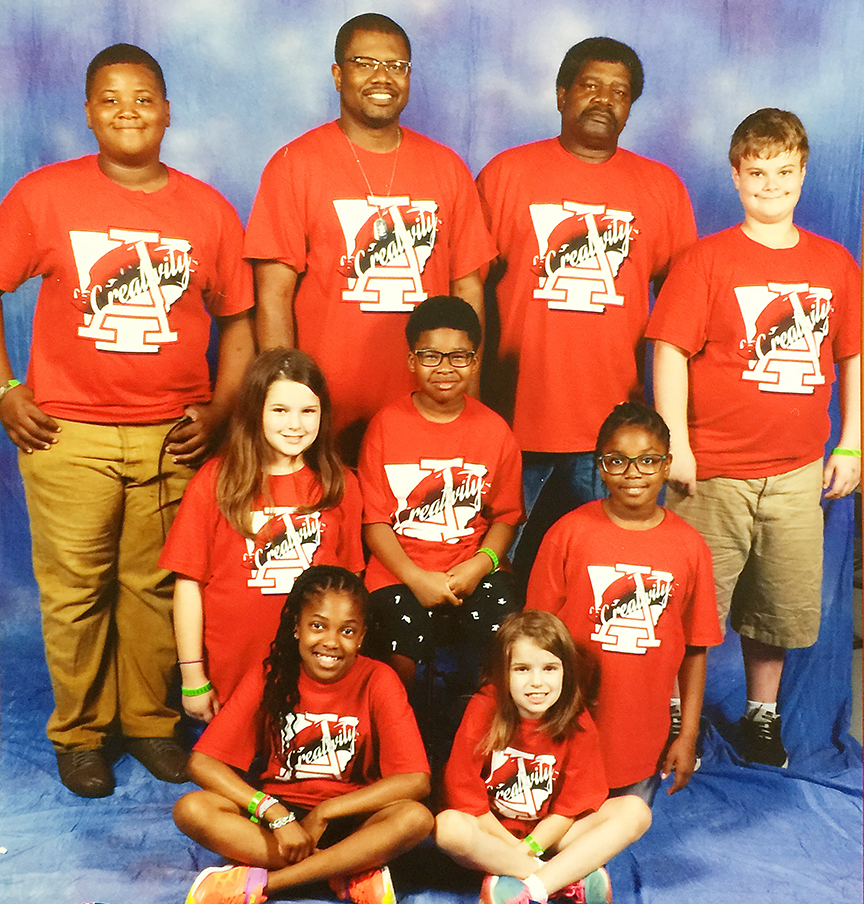 The proof is right here within our own Blytheville School District’s Odyssey of the Mind program! More than 20,000 students and supporters from around the world traveled to Iowa for the 39th annual Odyssey of the Mind World Finals May 23-26 at Iowa State University. Students from different cultures and widely varying economic backgrounds proved that creativity is universal by coming together for the event. They demonstrated their creative solution to an OM problem while appreciating the creativity of others.

This year both Blytheville World Finals teams participated in Animal House-Structure.  Fifteen grams of balsa wood and glue were designed into structures that have been known to hold thousands of pounds. This year teams turned their balsa wood structures into animals, and since animals need to eat they must be fed. The structure had its appearance transformed and explained during an original performance. During the performance the structure held the team-created food while it supported weights.

Our Blytheville teams representing our community and school district this year were Blytheville Elementary School coached by Curtis Walker, Sr., and Curtis Walker, Jr.  Teammates were McKinley Walker, Ryley Walker, Marley Rand, Hayden Cornwall, Tyrone Davis, RyAnne Davis and Elliana Davis. Their team placed fifth in the world, with the structure holding an astonishing 765 pounds. “The head judge informed us that it would come down to the spontaneous scores when determining the winners this year,” said Curtis Walker, Sr. Curtis Walker, Jr. stated, “When people ask what good comes from Blytheville, all they have to do is look at our Odyssey of the Mind teams!”

He added, “Our youngest five members decided to meet among themselves each night to pray before bedtime. None of us realized they were meeting on their own.  On Saturday night they told me they had indeed been praying, not to win, but to at least place in the top 10.”

After learning they had placed fifth in the world, the team insisted that they meet again (without assistance of the adults) to thank God for taking care of them and letting them do so well. “This team has proven maturity beyond measure, and it never ceases to amaze me how much faith a little one can have … that child-like faith came through for my team,” Walker stated.

“This made my heart smile when I learned what these little ones had been doing all by themselves,” stated Hay. “What a great group of children. It also shows what a great example had been shown to them by the Walkers.”

Blytheville Middle School/High School coached by Amy Louise Gullic, David Gullic and Susannah King placed in the top 20’s this year with a weightheld score of 550 pounds. Team members were Conner Frazier, Jacob Pruett, Gatsby Langston Brown, Shamari Cooper, Wills Gullic, Diamond Henry and Jasmine Johnson. Team “Honey Pot” had an impressive solution to this year’s problem and were definitely a team to be proud of with their teamwork and determination. According to Amy Louise Gullic, the team’s structure had broken the evening before and had to be repaired for competition. However, the team members showed no signs of stress during their performance. All smiles and great attitudes made this team prove that teamwork can make all the difference in competition.

Odyssey of the Mind is founded on the idea of promoting innovative thinking and recognizes exceptional creativity through the competition. Teams worked for months and were considered to be the best in their state or country. It’s the culmination of not only the past three days of competition, but of a year of hard work, brainstorming and creativity. “Our team have worked hard and traveled far to attend this three-day event,” said Diane Hay, director of the district’s Gifted and Talented programs. “Along the way they’ve made new friends, learned about different cultures and stretched their creative abilities to new limits.

“The teams have worked throughout the school year solving an OM problem and were judged as the most creative in a series of rigorous regional and state competitions. I couldn’t have asked for a better year for our two teams. At ISU Blytheville teams represented their state and country, proving they are the world’s most creative problem-solvers. OM has teams competing from throughout the United States and in 13 other countries including Canada, China, Germany, Hong Kong, India, Japan, Mexico, Poland, Qatar, Russia, Singapore, South Korea and Switzerland.

“Although this was a competition to become a world champion, kids formed lifelong friendships with their teammates and opponents. These friendships span the globe! Through OM they learned to communicate and appreciate different cultures. The OM “family” is made up of many different cultures, personalities and ages. There were 837 teams participating that were considered the best of the best.”

Teams came with interesting costumes, original stage designs and innovative inventions — all part of solving an OM problem. These problems were judged on creativity and risk-taking. The students learned to apply their creativity to problem solving. Teams also learned how to manage time and money, how to share ideas and negotiate with one another, and to perform in front of an audience. Because the problems provide for divergent solutions, students incorporated their knowledge and interests into their solutions such as math, history, art, music, science, acrobatics, athletics, robotics and anything else a child can imagine and enjoy.

OM students gathered for a graduation ceremony May 25 in front of a Hilton Coliseum crowd buzzing with pride. One of our very own students, Jasmine Johnson, BMS, participated in this year’s graduation ceremony because she was missing her own 8th grade graduation to attend World Finals.

Like most kids, OM team members will exceed expectations when given the opportunity to express themselves. OM Founder Dr. Sam Micklus says, “Odyssey of the Mind students have the best minds in the world.”

The mood was jovial as the OM mascot, Omer, led all attendees onto the floor of Hilton to huge cheers. However, the weather outside the Coliseum was anything but.  Rain and hail pounded the building before the ceremony began, causing a short delay. Once the graduates began to enter, through, all bad weather and delays were forgotten.  The ceremony was headlined by “Dr. Sam”, who expressed his excitement at seeing so many graduates. “Dr. Sam” gave the crowd the origin story of “Omer”, saying the mascot was “one of our children.” Spirit Award winner Wojtek Radziwilowicz made brief remarks as well, saying that, “There is nothing better than being wrong, funny, crazy or weird.”

Each graduate received a photo with “Dr. Sam” and Omer on stage with their certificate.

There were also many other events at World Finals, such as the Creativity Festival. Booths from each Odyssey state or country challenged attendees with creative games. NASA had a booth at the festival handing out informational materials. Entry to the competitions and festival were free and open to the public. The competition concluded with an Awards Ceremony, where more than 18,000 people gathered to see the World Champions of Creativity announced.

Eight hundred-thirty-seven teams of students each participated in the World Finals. Thirty-three US states and 13 international countries were a part of OM, including Canada, China, Germany, Hong Kong, India , Japan, Mexico, Poland, Qatar, Russia, Singapore, South Korea and Switzerland. Of these teams, 19 placed first in each division of the five problems. Next year’s OM World Finals will be May 22-25, 2019 held at Michigan State University in Lansing.

“I would like to say ‘thank you’ to our community supporters and our district for allowing us the opportunity to shine at World Finals again this year,” Hay added. “I have participated in OM at all levels, and I have to say this year has been a busy year but with great results.”  Of the years since I became the director of OM/Gifted Education, our coaches have produced six teams in the top 5 and 14 teams in the top 20.”

The website didn’t have final results before the year 2000; however, the district has had a first place WF team coached by Michelle Dalquist, who now is in Texas and still doing OM. “So, yes, there are great things coming out of Blytheville, Arkansas,” Hay said. “Just ask an Omer.”